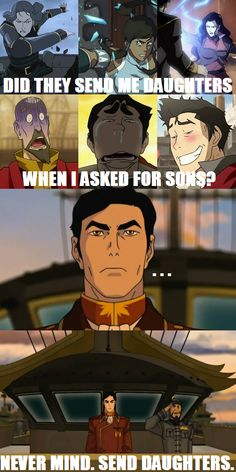 So I did my top five males of ATLA and now it’s time for the females. Avatar is great for having strong female characters, in fact, I don’t think there’s one female character who wasn’t strong. But of course I am not going to list all of them, I’ll just list my favourites.

So continuing with the ATLA series of blog posts here are my top five ATLA female characters!

I couldn’t decide on one. At first I was just going to have Ty Lee but then I remember Suki and I was like “Oh no where am I going to put her? I already have my top five!” So I decided to pair her with Ty Lee as they are awesome in similar ways.

They are both non benders and are really acrobatic. Some of the stuff they achieve when hunting people down or in a fight… goals, that is all I can say. They are goals.

Ty Lee with her unique fighting style that attacks the pressure points rendering people immobile in a small number of moves. And she does all this with a smile. I think the only time I ever saw her upset was when they went to that island and “bonded”.

I liked Ty Lee even though she was on the bad guy team. If she was real we’d be friends.

Then there’s Suki, leader of the Kyoshi warriors who are in themselves the coolest warriors Aang meets. They’re smart, they’re strong, they’re fierce and they’re female. The best scene of Suki for me was when they were in the prison and needed the warden as a hostage. She was just too cool and perhaps Sokka’s best girlfriend (even though back then I used to ship Sokka with Toph, I know impossible dreams). She was solemn, dark and kind of monotone and I loved her! Seriously Mai was such a great character, she was like a female Shikamaru in the sense that she was extremely badass but always seemed like it was drag for her to be going along with Azula on these missions. Like you could see her face saying “I could be at home chilling with Zuko but nooo we have to conquer the world”.

She was another non bender and she too killed it. I have no idea why the non benders in LoK (Legend of Korra) had such a hard time of it. Had they not heard of Mai, or Sokka, or Ty Lee or Suki and the Kyoshi warriors? They even had the beginnings of technology on their side.

She was badass with the knives but as the series progressed it turned out that she had more to her. Underneath that scowl she hid a lot of love. Love she felt for Zuko and those she cared about. She’s clearly a caring person and getting to know her better was a highlight for me. As Mai and Ty Lee then became more than just Azula’s hench men and we got to see them as people.

Is she possibly the best female villain to grace ATLA and LoK? I think so. She was smart and ruthless. She was merciless and she was manipulative. Up until Season 3 anything that she set her mind to she got.

Sure I couldn’t stand her, she was a pain and just really mean. I mean when Zuko got burned by his father she’s standing there smiling…. smiling! Like I’m pretty sure you’re still a child what is wrong with you?

But then with a father like Ozai did we really expect her to turn out differently? Sure Zuko did but even he had trouble finding his path. And having grown up with an older brother she would have learnt from his mistakes. She would have seen that kindness and compassion got Zuko nowhere with his father and so she would have taken a different route. She was also a genius fire bender whereas Zuko had to work at it so from the beginning she had her fathers approval. So really she couldn’t have turned out any other way… unless their mother had stood up for her as well as Zuko but I’m guessing that she had her reasons for which I’m going to have to read the comics to find out.

Also season 3 really highlighted how fragile she was and how much she relied on her power for happiness. When she started to lose power and got betrayed by Mai and Tai Lee I imagine that was a severe blow to her. Seeing her broken in the end was heartbreaking and was the first time I realised perhaps Zuko wasn’t the only one who suffered in that family.

Thanks Ozai, thanks a lot!

Even though she cracked in the end she’s still my number three as she was one of the strongest women on the show and caused the main characters more problems than Ozai did sitting on his butt in the fire nation palace.

There were moments when Katara annoyed me. She was a great but she could get a bit much and she could get all caught up in her feelings. When she got like that I either became like Sokka or Toph.

However having said that I think that’s one of the reasons that she’s my number two. Her annoying qualities made her more human. If everyone on team Aang was perfect and never did anything wrong they wouldn’t be human and they wouldn’t be relatable. And Katara was relatable, at least to me.

She stood up for those weaker than her. She believed in people and always had their best interests at heart. She was fiercely protective of those she loved and was caring and kind. She was independent, a strong woman and an activist fighting for the rights of those being oppressed by the fire nation. Sure she didn’t always think all her plans through and she did tend to trust some people too easily but then that’s why she had Sokka and Toph, the voices of reason and common sense.

She became one of the best water benders learning to use her abilities to heal and fight. She was amazing and is one of my favourite female characters. Even in LoK if I was to make a list for that she would still rank high up. She’s old in LoK but she’s still awesome and it seems her years have brought her wisdom. It saddens me that Aang is gone and that Sokka is gone but alas that’s what aging does.

Even having lost them both she’s still a strong ass woman whom I respect. 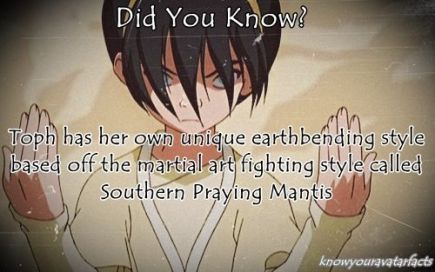 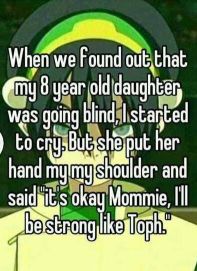 I swear from the moment she appeared it was love. I love this girl! She is the definition of badass!

She’s blind and small (at that point in time) and female but does that stop her from becoming the best earth bender of all time? No. Does it stop her from inventing metal bending? No.

She’s blind but sometimes she’s the one on the team who sees the clearest. Like the time they couldn’t figure out how Azula always knew where they were (Appa was shedding) or when she was teaching Aang earth bending. They thought she was being too harsh but she was making a fighter out of him.

She has such a strong personality and clear common sense. There are no pretenses with her, what you see is what you get and you always know where you stand with her.

Watching the last airbender when I was younger she was what I aspired to be. To be un apologetically awesome and chill.

I don’t know how to put it into words … she is just me and it was great seeing a female like that on television and killing it. So of course she is my numero uno.