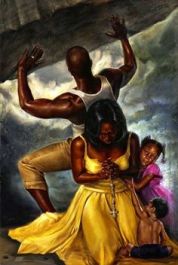 The bible has a lot to say on marriage and relationships but I started to notice something as time went on. People like to selective read certain passages so that it benefits them.

It annoys me especially when it comes to this particular passage as it’s such an important passage! It’s important for people who are married, who are courting, even for single people like me who merely think about it.

So this is the passage:

“Wives, submit to your husbands, as to the Lord. For the husband is the head of the wife, as also Christ is the head of the church; and He is the Savior of the body. Therefore, just as the church is subject to Christ, so let the wives be to their own husbands in everything.” Ephesians 5: 22- 24

I’ll stop here, because this is where most people stop. I don’t dispute these verses. They speak wisdom. I’m not married so I’m mostly going to recount what married people, who are christian, have said to me.

Yes you are to submit to your husband but it is not a bad thing. You are respecting him as head of the household. This does not mean just financially but spiritually he leads the family and emotionally as he holds you together. It’s a big responsibility for a man and it’s good to have the support of his wife.

Imagine if she always opposed him and never supported him? The marriage would never work.

My beef is with people who read this verse and think this is license to ill treat their wives. I personally don’t believe that is what is meant by this verse. Sure she is to submit to you but she still deserves your respect, she isn’t something you scrapped off your shoe.

A man and a woman each have a role in a marriage but somehow men in the church think it’s only the women who have a role to fulfill. It’s like they didn’t read the rest of the chapter.

The rest of the chapter says:

“Husbands, love your wives, just as Christ also loved the church and gave Himself to her, … So husbands ought to love their own wives as their own bodies; he who loves his wife loves himself. For no one ever hated his own flesh, but nourishes and cherishes it, just as the Lord does the church.” Ephesians 5: 25, 28- 29

Now you see, husbands have a role too. Their role is to love their wives as much as Jesus loved the church and he died for the church.

Do you know how much love a person has if they’re willing to give up their own life for you? That is a lot of love!

It also goes on to say that he should love his wife as if she was his body.

I’m sorry but that’s powerful. Men don’t beat themselves up (I’m talking physically), they don’t treat themselves like dirt or like second class citizens so why should they do so to their wives?

It is a two way street. If the marriage truly had God in it then the man would be respected and supported, the head with the emotional and physical support of his wife, and the woman would be loved like no other, she would never doubt her worth. She would be cherished.

“Nevertheless let each one of you in particular so love his own wife as himself, and let the wife see that she respects her husband.” Ephesians 5: 33.

Each person has a role in the relationship, it is not just the woman, it does not all fall on the woman. So please let us stop our selective reading. Let us acknowledge the passage in it’s entirety and have healthier relationships that are balanced and Godly.

Ps: image from Google but credits to the page; http://www.nairaland.com/2201145/good-wife-nigeria-standards-pic/1

And the other two are from Pinterest from vmchadwick Prayer board and BeYoutifullMe’s Black Love #Beautiful board.